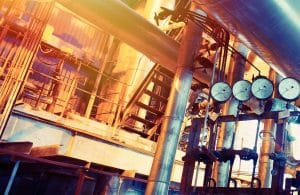 For companies in most industries, it’s been a fairly long time since electrical thermal management was such a burden. In the decades since heat exchangers and other custom thermal solutions have gained a hold, they’ve transformed the way companies approach thermal management and the costs that were often associated with it. However, that hasn’t been true for every industry, particularly those that operate in particularly harsh and hazardous locations. While conventional heat exchangers are highly convenient, they weren’t initially designed to provide the high level of safety and protection required. Now, however, specialized heat exchangers can provide safer electrical cooling in hazardous locations, as well, helping more industries benefit from their significant advantages.

Streamlining electrical thermal management has been a boon to most businesses, but it wasn’t an innovation borne out of convenience. In fact, the growing reliance on technology meant that the importance of reliable cooling methods also grew more prominent. Therefore, companies had no choice but to accept the burdens of less efficient methods, such as using air conditioning or air compressing units to cool their electrical enclosures. That same need extends to operations in hazardous locations. However, it’s also mirrored by the need for all forms of technology and equipment to maintain a high level of safety for both the equipment and the employees who use it.

The innovation of heat exchanger technology

The reason heat exchangers were able to make electrical cooling more efficient and less burdensome was because they don’t utilize the same cooling methods. Instead of generating chilled air through HVAC or compression, heat exchangers focus on preventing electrical waste heat from gathering into heat pockets within an enclosure. They do this by utilizing a safe, eco-friendly cooling fluid that absorbs waste heat and transfers it to a heat depository, such a heat sink, where it can’t damage sensitive electrical components.

Making them suitable for hazardous locations

The process of transferring electrical waste heat is far more efficient than air conditioning and air compressing solutions. This means heat exchangers don’t need as much energy to operate, or as much equipment to cool electrical enclosures. However, transferring heat doesn’t automatically make them viable for applications that are deployed in hazardous locations, such as oil and gas operations. To be safe enough for such conditions, modern heat exchangers can be designed with additional fortification that helps ensure their continued safety even under extreme conditions.