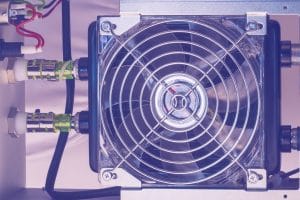 Sometimes, new technology makes an impact because it does something better than its currently existing counterparts. Sometimes, however, that innovation can be so impactful that it’s almost as though the new technology has completely revolutionized its respective field. Heat exchangers started off as the first example, providing a more efficient and cost-effective way for companies to consistently cool their technology and equipment. It turned out, however, that the innovation made possible thanks to the help of heat exchangers has had a much bigger impact than many people realized at first. That impact is due to the fact that heat exchangers improve thermal management not just by managing waste heat better than past alternatives, but by doing so in a simpler and more sustainable way than their predecessors.

A Look at Traditional Cooling Concepts

Before heat exchangers, electrical thermal management was still a vital concern for most contemporary industries. However, it was a concern that was much more complex to address. The only viable solutions were air conditioning and air compression units, both of which involve chilling air and circulating it through an enclosure. It’s an effective solution, to an extent, but the complicated machinery requires frequent maintenance and repair, and it takes large amounts of energy to keep operational.