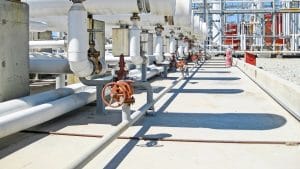 Electrical thermal management has always been a concern for most forms of technology. As more and more companies in increasingly more industries began relying on technology for all aspects of their operations, electrical thermal management became a significant concern for them, as well. At first, meeting that concern was a burden, as companies had to implement costly and cumbersome solutions such as air conditioning or air compressors to keep their electrical systems properly cooled. Today, however, heat exchangers have become a staple in many different industries, thanks to their ability to improve thermal management processes in ways that significantly lower costs and boost productivity for most companies.

In the manufacturing industry, technology plays a significant role in a company’s overall productivity and output. The ability to keep that technology properly cooled is a significant factor in that productivity – when manufacturing equipment and machinery overheats, entire production lines often have to be halted until the equipment is repaired or replaced. With traditional solutions, this was a common occurrence. However, since implementing modern heat exchangers to transfer electrical waste heat, rather than powering air conditioners to overcome it, companies have experienced a significant boost in productivity and reduction in energy costs, maintenance, and downtime.

Thermal management in the molding industry can be much more involved than the electrical enclosure cooling required for manufacturing processes. While cooling electrical enclosures is also a vital process, one of the more demanding thermal management processes is machine tool cooling and rapidly removing heat from fresh molds. Heat exchangers made an impact on enclosure cooling by introducing the ability to transfer waste heat instead of having to combat it with chilled air. In the molding industry, this same ability allows for more rapid and consistently even machine tool cooling, giving companies the ability to speed up cycle times while minimizing the risks of abnormal molds due to inefficient cooling.

The food and beverage industry

Like molding and a few other industries, food and beverage production has several unique thermal management concerns that directly impact a company’s productivity. For example, many producers rely on automated machinery, which requires particularly efficient and eco-friendly thermal management solutions. Also, foods and beverages must undergo certain processes, such as pasteurization, to ensure that they’re safe for consumption. These processes often involve accurate and consistent temperature control, which heat exchangers can provide at a high rate of efficiency and without the need for excessive amounts of energy.