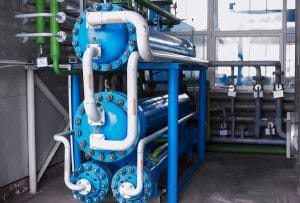 For companies where modern heat exchangers are the main thermal management solution, the biggest difference between the advanced solutions and more traditional cooling methods is the cost associated with each. Compared to things like air conditioners and air compressors, heat exchangers can operate longer and more reliably, all while using a fraction of the energy and requiring minimal maintenance to do so. However, the biggest difference – the one that all others stem from – is the manner in which heat exchangers approach thermal management. Rather than chilling air to overwhelm electrical waste heat, the more streamlined solutions operate on more natural and easily manageable methods of transferring heat.

Phase-change cooling is an innovative heat transfer process that takes advantage of a cooling fluid’s latent heat of vaporization – or the point at which it absorbs enough heat to evaporate. Within a heat exchanger, the cooling fluid will absorb electrical waste heat as it’s emitted, until it evaporates and becomes less dense. This makes it easier to transfer the fluid and the heat that it has absorbed, preventing the waste heat from collecting into heat pockets that could damage sensitive electrical equipment.

Convection is the process by which a hotter and less dense fluid rises above cooler, more dense fluid. As the fluid in a heat exchanger absorbs heat and evaporates, it becomes less dense and will naturally separate from the cooler fluid. Inside the confines of a heat exchanger, phase-change cooling allows the fluid to more efficiently absorb waste heat, while convection makes it possible to transfer the heated fluid rapidly and with minimal effort. Transferring heat in this manner provides consistently reliable electrical thermal management, but doesn’t require the extensive and often damage-prone equipment that more traditional solutions rely on.

Conduction is a process by which waste heat is transferred through a solid substance, such as a metal cold plate, while the material remains stationary. Metal is highly conductive to heat, making cold plates an efficient and important part of many modern heat exchangers. Cold plates are custom-designed with flow paths machined into them. The cooling fluid flows through these paths, and as the plates are exposed to waste heat, the heat is transferred to the fluid. Combined with the eco-friendly and natural methods through which the fluid transfers heat, the conduction provided by cold plates helps maximize a heat exchanger’s ability to efficiently cool electrical equipment.

For more information about the simple but highly effective methods that heat exchanger utilize, call Noren Thermal Solutions in Taylor, TX, at 866-936-6736.