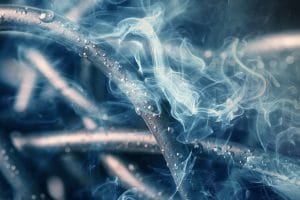 The trick to implementing effective electrical thermal management solutions isn’t just efficiency, but also the level of protection the solution provides for itself and the enclosure it’s attached to. While that protection most frequently involves ingress protection against environmental factors, including moisture, it also includes some level of defense against any moisture developing within the enclosure and coming into contact with sensitive electrical equipment. Condensation can form within the enclosure from a number of reasons, but for conventional systems like air conditioners, it occurs more frequently. With heat exchangers, companies can do more to effectively protect enclosures from internal condensation as well as other potentially hazardous factors.

Condensation forms when temperatures reach the dew point, or the point at which surrounding moisture in the air condenses into liquid. With air conditioners, which actively chill air and circulate it within the electrical enclosure, condensation is a common concern. While there are several solutions to addressing it, such as condensate drain to allow the moisture to flow out of the enclosure, many of them can affect the air conditioner’s and electrical enclosure’s abilities to protect against other external contaminants.

How to Heat Exchangers Prevent It Better

A more effective solution is to avoid using air conditioners altogether, and therefore, eliminate one of the most common sources of internal condensation. That also eliminates the need to add a condensate drain and compromise the enclosure’s level of ingress protection. For example, heat exchangers don’t chill the air within an enclosure, but rather transfer any waste heat that electrical components generate within it. This means they can more effectively keep temperatures outside of the dew point while still preventing the enclosure from overheating.

For more information on how to avoid the dangers of condensation within an electrical enclosure, call Noren Thermal Solutions in Taylor, TX, at 866-936-6736.