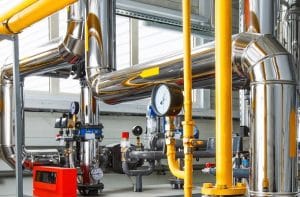 There are many obvious differences in how modern heat exchangers operate compared to more traditional electrical cooling solutions. For example, companies that implement heat exchangers for their electrical thermal management needs can often realize the benefits of doing so almost immediately. Nearly all of the differences, both obvious and discreet, equate to much more efficient and streamlined electrical cooling processes, helping companies benefit in everything from improved efficiency to lower overall costs of operations, and much more. Among the many different ways in which heat exchangers are an improvement over traditional cooling methods, three of the most important include the specific heat transfer methods they utilize, the costs of utilizing them continuously, and the consequences for a company and its environment.

The approach to electrical thermal management

The goal of electrical thermal management is to prevent electrical enclosures from overheating, and one of heat exchangers’ greatest achievements was proving there were more ways to do this than by utilizing chilled air. Traditionally, companies had little choice but to rely on air conditioning and/or air compression technologies to cool their electrical equipment. These methods involve generating chilled air, then circulating it through electrical enclosures continuously. This helped keep temperatures within the enclosure low as the components inside generate electrical waste heat. With heat exchangers, however, companies have been able to achieve the same thermal management goals without having to rely on the use of chilled air.

The costs of operations in the long-term

The ramifications of no longer having to rely on chilled air to cool electrical enclosures have been significant and far-reaching. Instead of more traditional air-chilling methods, heat exchangers are designed to use a finite amount of cooling fluid that can efficiently absorb waste heat produced by electrical components. Once the fluid becomes heated enough to evaporate, it can rapidly transfer the heat that it has absorbed to a custom heat sink or other heat depository. Eliminating the need to continuously generate and circulate chilled air also drastically reduces the costs associated with the preventing electrical overheating. Transferring heat doesn’t require nearly as much energy, and more streamlined heat exchangers don’t require frequent maintenance or unscheduled repairs.

The consequences of electrical cooling

The costs that are tied to traditional electrical thermal management processes aren’t the only thing that heat exchangers have helped companies improve in their cooling processes. In today’s more environmentally conscious society, the ability to reduce their environmental footprints is another significant advantage for modern companies. Because heat exchangers utilize much less energy, don’t require the use of harmful chemicals, and utilize more natural processes of transferring heat, they’re also a much more eco-friendly solution compared to more traditional methods. This has been an important benefit in helping companies stay competitive while also practicing greener and more eco-friendly business processes.

For more information about the key differences when cooling enclosures with heat exchangers, call Noren Thermal Solutions in Taylor, TX, at 866-936-6736.