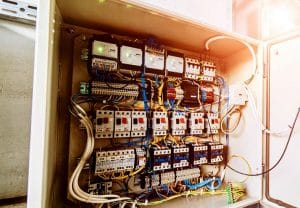 Thermal management these days means many different things, but in every industry, it’s a vital part of their overall efficiency and operations. That’s especially true for cooling electrical control panels – a process that’s essential for keeping most forms of industrial technology running smoothly. Cooling control panels and other electrical enclosures is one of the oldest forms of electrical thermal management, and today, it remains one of the most important areas for more streamlined cooling methods. With the help of modern heat exchangers, most companies have been able to significantly enhance their electrical panel cooling efficiencies, and as a result, their overall efficiency and productivity.

The importance of electrical panel cooling

For as long as companies have relied on technology to enhance their operations, they’ve also relied on effective electrical cooling methods to prevent their applications from overheating. While technology can vary between industries, most forms of it involve the use of control panels and other enclosures. When housed in such enclosures, electrical components constantly emit waste heat that can accumulate and form heat pockets within the enclosure, causing extensive damage to the electrical components within it. The point of cooling these control panels and enclosures is to prevent this damage, allowing the application to continue running without incident.

Traditionally, companies had few choices for effectively cooling their electrical enclosures, including control panels. Options were typically limited to solutions such as air conditioning and air compression equipment, which cooled enclosures by providing continuous streams of chilled air throughout them. While effective, this method of electrical cooling requires extensive amounts of energy to facilitate, as well as complex equipment that can be prone to breaking down and requiring frequent repairs. Today, however, companies more often choose more efficient modern cooling solutions, such as heat exchangers, that utilize more natural and efficient methods of electrical cooling.

The benefits of better panel cooling

Rather than using chilled air to prevent electrical overheating, modern cooling solutions like heat exchangers take a different approach. Using an eco-friendly cooling fluid instead of chilled air, the cooling units are designed to prevent electrical overheating by preventing waste heat from accumulating within the control panel. This process of transferring heat, which involves absorbing the heat and moving it to a cooler area of the heat exchanger, gives the more advanced cooling units several advantages over their more traditional predecessors, including reduced needs for energy, little or no unscheduled maintenance, and much more.