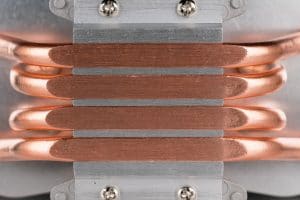 Before heat exchangers and their ability to transfer waste heat revolutionized electrical cooling, the most common thermal management solutions followed the same basic principles. Using chilled air that’s generated through HVAC or air compression methods, these solutions forced the temperatures within electrical enclosures to remain well below maximum operating temperatures. As technology and electrical cooling have advanced, however, the trend hasn’t been to make chilling and circulating air in an enclosure more efficient. Instead, electrical thermal management has taken leaps forward by relying on more natural heat transfer methods that don’t rely on chilled air at all.

On the surface, it can seem like the only reliable way to prevent electrical overheating is to use chilled air to keep temperatures low. Overheating occurs when enough waste heat from electrical components accumulates into heat pockets, rising above the system’s maximum operating temperature and damaging the sensitive components. While chilling the inside of an electrical enclosure is an effective way to prevent overheating, it isn’t the most efficient way. Instead of using vast amounts of energy to create this chilled air, modern thermal solutions, such as heat exchangers, focus instead on transferring the electrical waste heat before it has a chance to accumulate and cause overheating and damage.

The concepts that modern heat exchangers utilize to transfer electrical waste heat include natural/forced convection, conduction, and phase-change cooling. Inside of a heat exchanger, an eco-friendly cooling fluid (usually water) can quickly absorb waste heat as soon as it’s produced. Once the fluid absorbs enough heat to evaporate, it becomes significantly less dense and can be more easily transferred to a cooler area of the heat exchanger, such as a heat sink. After it releases the heat, the fluid condenses back into a liquid, then continues flowing back toward the source of the heat. This creates a liquid cooling loop that prevents electrical waste heat from ever being able to accumulate.

By now, heat exchangers have remained popular enough that the benefits of transferring waste heat over using chilled air have become largely well-known. For example, because heat exchangers transfer heat naturally, they don’t require as much energy to keep electrical enclosures cooled. With more traditional solutions, energy is one of a company’s biggest expenditures, and lowering it by upgrading to more advanced heat transfer solutions has helped many companies significantly reduce that cost. For more information about how transferring heat can make electrical cooling more efficient, call Noren Thermal Solutions in Taylor, TX, at 866-936-6736.