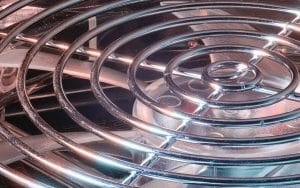 Before it became typical to implement heat exchangers for most electrical thermal management needs, the idea of ambient cooling didn’t seem very viable. Electrical components must be housed within enclosures, and without air conditioning units to keep those enclosures cool, they would quickly overheat and malfunction, before breaking down completely. However, heat exchangers proved that the use of air-to-air cooling technology was not only a viable solution, but also a better one in many aspects when compared to more traditional air conditioning units. Since then, air-to-air heat exchangers have become an increasingly more vital part of modern electrical cooling solutions.

The biggest difference between air conditioners and air-to-air heat exchangers is the method by which they approach electrical thermal management. For example, air conditioners have been highly effective at preventing electrical overheating because they consistently generate chilled air to combat electrical waste heat. Circulating the chilled air throughout an electrical enclosure ensures that no areas within it can reach harmful temperatures. By contrast, air-to-air cooling units take a more conservative approach. The custom thermal solutions collect waste heat as it’s generated, then transfer and dissipate it before it has a chance to accumulate. Compared to chilling the air inside of it, cooling the enclosure is a much more efficient and eco-friendly thermal management goal.

Most modern applications involve electrical systems with maximum operating temperatures that are well above the ambient temperatures outside of their enclosures. That makes ambient cooling more than sufficient for such applications, and air-to-air cooling is the most efficient way to achieve it. Because the process involves little more than transferring waste heat through a closed loop, it doesn’t require nearly as much energy as more complicated enclosure chilling methods. The ability to minimize energy usage is one of the biggest advantages of air-to-air units, and has been a cornerstone in modern companies’ goals of conserving and managing energy more effectively.

Energy conservation helps companies lower their electrical thermal management costs, which has traditionally been one of the biggest factors in their overhead. In addition, minimized electrical cooling with air-to-air heat exchangers also lowers the time and cost investments needed to maintain electrical thermal management systems. Unlike air conditioners, which often require maintenance, repairs, and replacement, heat exchangers can operate for years at maximum capacity without wearing down and interrupting operations. For more information about how air-to-air cooling compares to more traditional air conditioning, call Noren Thermal Solutions in Taylor, TX, at 866-936-6736.