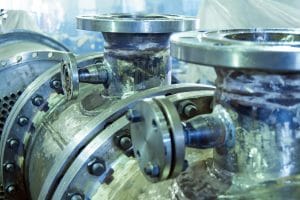 The goal of electrical thermal management has always been to effectively prevent waste heat from accumulating into pockets, which could lead to serious system damage. Traditionally, this has been accomplished through various ways, such as circulating chilled or compressed air through electrical enclosures. However, heat exchangers take a different approach by transferring the heat instead of eliminating it. The processes for doing so (i.e., convection, natural/forced convection, and phase-change cooling) require much less energy and effort than using chilled air to keep enclosures cool. They also allow for the repurposing of the waste heat, which means companies can save more costs and streamline operations even further.

Managing Instead of Eliminating Waste Heat

A heat exchanger can be designed in several different ways, such as heat pipes or cold plates, and can achieve varying levels of high-performance thermal management (including below-ambient cooling). In each case, however, the goal is the same – to collect electrical waste heat as soon as it’s emitted, and then transfer it somewhere to be dissipated safely away from sensitive system components. That could be a heat sink appropriate to the heat exchanger unit, or in some cases, it may be transferred and used for applications that require heat. Doing so gives companies a virtually free source of heat to offset overall energy costs.

Once electrical waste heat is collected, it can be utilized in several different ways, as well. For example, companies that rely on wastewater treatment can utilize electrical waste heat to sustain high temperatures during the process. Food and beverage companies rely on sustained heat, as well, for sterilization and pasteurization procedures. There are many different applications that can benefit from heat exchangers’ ability to collect and transfer waste heat instead of instantly eliminating it with chilled air.

For more information about where to transfer electrical waste heat for higher efficiency, call Noren Thermal Solutions in Taylor, TX, at 866-936-6736.