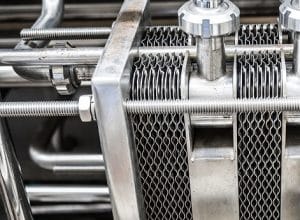 When it comes to technological revolution, simple is often the more advanced solution. For example, when it comes to electrical thermal management, the more complex methods employed by air conditioners and air compressors cost companies significantly to run. The evolution of electrical thermal management came in the form of simpler, more manageable, and more efficient processes, such as those employed by modern heat exchangers. By simplifying the process, heat exchangers helped revolutionize the way companies cool their technologies, as well as the different ways in which they can implement new technologies with minimal interruption to their operations.

A significant leap in thermal management

The goals of electrical thermal management haven’t changed. The point has always been to prevent overheating by stopping electrical waste heat from forming into pockets within an enclosure. Traditionally, air conditioners addressed this challenge by overcoming the heat with chilled air, which made air conditioners essential to maintaining operations. It also limited companies in many ways: the energy costs that air conditioners generate are a significant burden, and the units themselves required significant space to accommodate. Heat exchangers were a leap in electrical thermal management in several important ways, though reduced energy consumption and a much smaller physical footprint were among the most beneficial.

Simple processes that made it possible

The processes that make heat exchangers so efficient and versatile are simpler than those that power air conditioning equipment. For example, some heat exchangers rely on phase-change cooling, which utilizes a cooling fluid’s latent heat of vaporization to absorb heat without any notable rise in temperature. The heat evaporates the fluid, which becomes less dense and flows to a cooler area of the heat exchanger. Others employ methods such as natural/forced convection and/or conduction, which can also be achieved with minimal equipment and more natural, less energy-dependent processes.

For more information about why simple heat transfer methods have been so revolutionary, call Noren Thermal Solutions in Taylor, TX, at 866-936-6736.