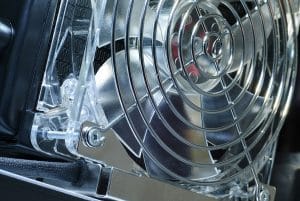 Ambient cooling has long been one of the greatest advantages that heat exchangers provide for most applications. The idea is to cool an electrical enclosure to just above the ambient temperature outside of it, which is usually well below an application’s maximum operating temperature. The initial implementation and success of ambient heat exchangers showed companies that they no longer needed to chill electrical enclosures and other technology by chilling them with air conditioning units. Today, heat exchangers come in several different variations, though simple ambient cooling is still often the most appropriate solution.

All forms of electrical technology generate at least some waste heat, and if not controlled properly, that excess heat could lead to disastrous overheating. However, many forms of modern technology are efficient enough to produce minimal amounts of waste heat, or to have operating specs that allow for temperatures much higher than the ambient temperature around it. In such cases, ambient heat exchangers offer an optimal, highly efficient, and cost-effective thermal management solutions.

The secret to how heat exchangers achieve ambient cooling is also the secret to what makes them more efficient and eco-friendly than air conditioners and other traditional solutions. The secret is that, rather than trying to force waste heat out of an electrical enclosure, a heat exchanger causes it to do so naturally. The cooling fluid within the heat exchanger (usually water) absorbs the waste heat, evaporating in the process. As it becomes less dense, the heated gas flows toward the cooler area of the heat exchanger where it can safely release the heat, condense back into liquid, and circulate back toward the heat source.

The many benefits of ambient heat exchangers

Because ambient heat exchangers rely on minimal equipment and energy, they significantly reduce the overall costs of electrical thermal management for most companies. They also produce no pollution and utilize safe cooling fluid to minimize a company’s overall environmental footprint. For more information about when to choose ambient heat exchangers, call Noren Thermal Solutions in Taylor, TX, at 866-936-6736.