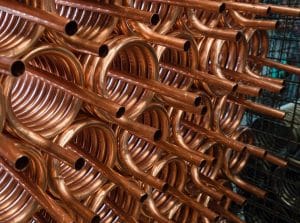 These days, heat exchangers come in a wide range of varieties according to any given application’s specific needs. However, some of the first (and still the most popular) versions are ambient units that keep electrical enclosures cooled to just above the ambient temperature outside of them. At first, ambient cooling technology proved a highly viable and more affordable alternative to solutions such as air conditioning and air compressors. However, even as the technology has advanced, relatively simple ambient heat exchangers still remain popular and highly effective cooling solutions.

Ambient heat exchangers work on the principles of transferring electrical waste heat rather than overpowering it with chilled air. Instead of circulating conditioned or compressed air through an electrical enclosure, a heat exchanger can keep electrical waste heat in constant motion as it’s emitted. The fluid closest to the heat source absorbs the heat, becoming less dense as it evaporates and flows to a cooler area of the heat exchanger. After dissipating the heat, the fluid becomes liquid and dense again, flowing back toward to the heat source.

When Ambient Heat Exchangers Are Preferable

Keeping the waste heat in motion and dissipating it away from electrical equipment prevents it from collecting into heat pockets and becoming hazardous to sensitive components. It also keeps the enclosure at temperatures just above the ambient temperature outside, which is typically well below the maximum operating temperatures of most applications. In addition to providing a more manageable and cost-effective way to cool modern technology, this simplified process of managing waste heat also gives ambient heat exchangers the ability to maintain a high level of ingress protection for optimal safety and efficiency.

For more information about how ambient heat exchangers work and when they’re the best option, call Noren Thermal Solutions in Taylor, TX, at 866-936-6736.