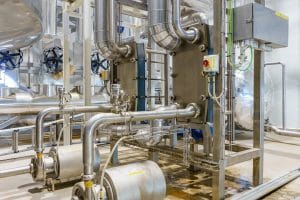 One of the biggest reasons why heat exchangers have been so widely adopted over the last few decades is because they significantly lower energy costs by cooling electrical enclosures more efficiently than air conditioners. Given a company’s reliance on technology, especially in the manufacturing industry, it should be no surprise that the ability to more efficiently cool that technology can significantly benefit a company’s output. However, the many ways in which heat exchangers’ efficiency impacts a company’s overall productivity isn’t always as obvious until after they’ve been implemented.

The foundation of a heat exchanger’s advantage over a more conventional air conditioner or air compressor is to transfer electrical waste heat rather than try to overcome it. This means the typical challenges that come with electrical cooling, such as constantly maintaining cooling equipment or repairing it from frequent damage, aren’t as much of a concern. The money and time that companies and their employees save can be invested in more productive measures, and heat exchangers can operate longer without interruption or the need for replacement.

The key to a heat exchanger’s success is how it operates. For air conditioners, the constant need for repairs and the large amounts of energy they require a necessary evil. They function by creating chilled air through the use of Freon and complicated machinery, then they have to circulate that air continuously throughout the inside of an electrical enclosure. By contrast, heat exchangers take the opposite approach by focusing on the generated waste heat itself. The fluid within the unit absorbs this heat, and then transfers it away to be dissipated from sensitive electrical components.