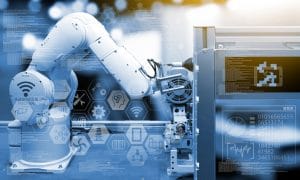 Streamlining electrical thermal management has placed heat exchangers at the crux of advancing technology for several decades. For companies that relied on that technology, the ability to break free from their reliance on air conditioning-based electrical thermal management meant fewer maintenance headaches and lower energy expenditures. For designers continuously innovating more advanced technology for those companies to use, heat exchangers granted the freedom to design more compact devices and machinery that packed more power into smaller spaces. One of the most impactful benefits of that freedom has been automated technology, whose development and adoption have helped companies streamline their operations even further.

The challenge with nearly any form of technology is that it generates waste heat. The electrical components have to be contained to prevent contaminants from entering that could lead to a system malfunction or failure. However, the confined space within an electrical enclosure makes it easy for waste heat to accumulate into pockets. Despite the fact that they emit waste heat as a result of the power they produce, electrical components are easily damaged by temperatures that exceed their maximum operating limits. For automated technology, the challenge is even more significant. The goal is to utilize technology that requires minimal interaction or upkeep, and heat exchangers’ efficient operating methods have been ideal for many of today’s automated systems.

The Added Value of Heat Exchangers

An air conditioner is called such because its machinery chills a supply of air and then circulates it within a designated area. A heat exchanger is called such because it exchanges heated air for cool air (often through the medium of a cooling fluid) to prevent it from forming heat pockets. The distinction is important for many reasons; constantly chilling air and circulating it through the enclosure takes a lot of energy and the use of Freon, which contains several chlorofluorocarbons. By contrast, exchanging heat only requires the right cooling fluid and minimal apparatus to circulate it (such as heat pipes and/or cold plates). This means automated equipment can continue operating without significantly raising energy costs or breaking down due to complicated mechanical problems.

For more information about how heat exchangers have made automation easier, call Noren Thermal Solutions in Taylor, TX, at 866-936-6736.