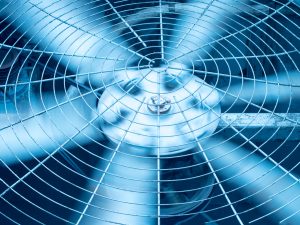 The knowledge that electrical components generate heat and that heat can damage those components if not removed has guided technology’s creation and use for generations. However, the ability to remove that heat effectively and efficiently, with minimal effort and maximum results, hasn’t always been possible. Over the last century, the concepts behind electrical thermal management have changed drastically in every industry. From cooling large electrical equipment and control panels to allowing for smaller, more powerful forms of technology, heat exchangers are today’s go-to for advanced thermal management solutions. Yet, it took a while before they were successful enough to become the norm.

Long before heat exchangers became common, most electrical thermal management applications required the use of traditional air conditioning systems. Like all air conditioners, their goal was to keep electrical enclosures cool by generating chilled air and circulating it through the enclosure. The method was effective and remained the most frequently implemented thermal management solution, even for manufacturing facilities that required large equipment just to operate.

While the enormous costs of running, maintaining, repairing, and replacing air conditioning units were necessary, many companies felt the burden of having to dedicate large percentages of their income just to one application. Soon, air conditioners were being replaced with air compressors, which eliminates heat by compressing ambient air into a vortex. Air compressors proved smaller and more manageable than conventional air conditioners, but compressed air is expensive and so is the equipment needed to make it run consistently.

Several decades ago, air conditioners and air compressors were suddenly no longer a necessary burden thanks to the advent of heat exchangers. Where air conditioners blasted chilled air and compressors simply compressed ambient air, heat exchangers collect any waste heat that electrical equipment gives off and transfers it away. Heat exchangers use a variety of heat transfer methods, including natural/forced convection, conduction, and phase-change cooling, to ensure consistent thermal management results at minimal operational costs.

To learn more the about thermal management concepts that have led up to heat exchangers, call Noren Thermal Solutions in Taylor, TX, at 866-936-6736.