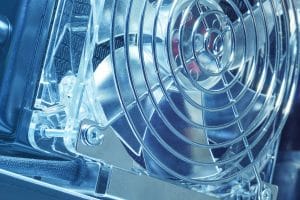 The most energy efficient way to prevent something from overheating is to allow heat to dissipate away from it. If it were possible to leave electronic components out in the open, then innovative thermal management solutions wouldn’t be as vital to modern technology. However, air-to-air heat exchangers often come as close as possible by utilizing natural and forced convection to prevent heat pockets from forming within electrical enclosures. For many applications, this is more than enough to keep technological equipment running continuously with minimal risks of heating issues, and with a minimal need for additional energy consumption.

Convection describes the natural flow of fluids that occurs according to their density. For instance, as a cooling fluid absorbs heat, it becomes less dense, which causes it to rise as cooler, more dense fluid flows in to replace it. Forced convection is the acceleration of this process through the use of one or more small fans and allows heat exchangers to achieve a higher rate of heat transfer. Within a heat exchanger, natural and forced convection allow for the constant transfer of heat without the need for complex equipment or the large amounts of energy needed to power such equipment.

In addition to natural and forced convection, modern heat exchangers also utilize a variety of other equally eco-friendly solutions, such as phase-change cooling. By harnessing a fluid’s latent heat of vaporization (the point at which it absorbs enough heat to evaporate), heat exchangers provide even more ways to cool electrical enclosures and other technological equipment consistently and with optimal efficiency.

To learn more about natural and forced convection are more than enough to cool control panels, call Noren Thermal, Inc. in Taylor, TX, at 866-936-6736.